BRIT tourists are among 34 injured after a huge volcanic eruption in New Zealand as police say no more survivors will be found.

A helicopter is seen on the island covered in ash[/caption]

Officials have revealed two British women are in being treated in hospital.

Some of the victims have 70 per cent burns and may not survive, a source told the New Zealand Herald.

Dozens of holidaymakers were evacuated from the island after the volcano suddenly erupted, sending 12,000ft plume of smoke and rock into the air.

New Zealand’s Prime Minister Jacinda Arden said this evening: “To those who have lost or are missing family and friends, we share in your unfathomable grief at this moment in time and in your sorrow.

A missing persons list which aims to reunite concerned family members with their loved ones shows up to five Brits still missing.

It is unclear whether any Brits are among those still missing or merely among the injured.

Images showed one group of people trekking across the centre of the volcano’s crater just a minute before the eruption.

The first victim has been identified as a tour guide for White Island tours.

Tony Bonne, former mayor of the coastal town of Whakatane, described the man as a young, energetic, and experience guide, news.com.au reported.

Five Brits – two 67-year-old men and an 80-year-old woman – are listed as among up to 27 still missing on a website set up by the New Zealand Red Cross, the Evening Standard reported.

The Sun is not naming them because they haven’t been confirmed by authorities to have been on White Island.

The site was launched at the request of New Zealand police.

They said people from overseas can also call +64 9105 105 to submit information about friends or family who might have been on White Island at the time of the blast.

‘NO SIGNS OF LIFE’

The disaster followed a series of warning signs that had been growing more alarming over recent weeks, as questions are asked about why tour groups were allowed to visit the island.

Survivors of the blast were taken to hospitals on New Zealand’s North Island, many with severe burns.

Among those listed on the site as currently missing are people from Australia, Singapore, China, the Czech Republic, Guatemala, and Burma.

Around half of those on the island are thought to have been from Australia.

A statement released by New Zealand police just after midnight local time said reconnaissance flights over the island saw “no signs of life…at any point”.

It continued: “Police believe that anyone who could have been taken from the island alive was rescued at the time of the evacuation.

“Based on the information we have, we do not believe there are any survivors on the island.”

It added that the military would be deploying drones to survey the area at first light.

Did you witness the volcano eruption? Are you or someone you know a tourist visiting the area? We want to hear from you. Contact our news desk on +44(0)207 782 4368 or email tips@the-sun.co.uk

A scientific monitoring camera appeared to capture a group of tourists walking through the volcano’s crater at 2.10pm – just one minute before the eruption.

The camera – which takes a new still image every ten minutes – did not take another clear shot, and is believed to have been buried in rubble from the blast.

A fleet of rescue helicopters was dispatched to send emergency workers to the area in the hope of finding survivors and escuers were able to reach the shore by boat. 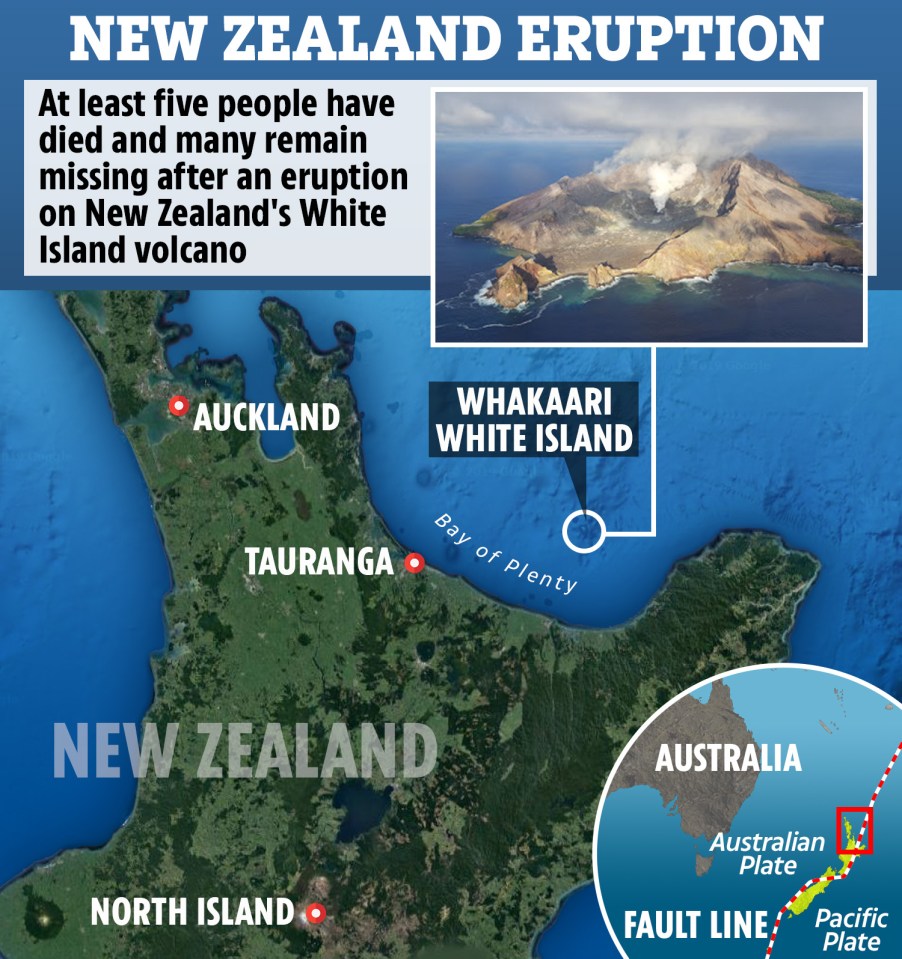 A group watch the eruption from a boat[/caption]

Paramedics tend to an injured person evacuated from the island[/caption]

WHY DID WHITE ISLAND ERUPT?

Just below Earth's outer crust is a layer of magma, or liquid rock, known as the mantle.

Volcanoes form when pressure in the mantle begins to build, and magma is forced up through gaps in the Earth’s crust.

In certain conditions, such as movements of the planet’s tectonic plates or currents of heat in the mantle, the pressure will build further and, eventually, the volcano will erupt, throwing magma into the air.

New Zealand lies on the so-called Ring of Fire, a 25,000-mile chain of 452 volcanoes around the edge of the Pacific Ocean.

The ring runs up past Asia and Russia, across to Alaska, and down the westerly coasts of North and South America.

Since 1850, about 90 per cent of the most powerful eruptions in the world have happened along this boundary.

White Island was a very active volcano and questions are now being raised about whether tourists should ever have been allowed to visit.

This afternoon, that alert level shot up to 4 – but has since come down to 3.

Dr. Jessica Johnson, a volcanologist at the University of East Anglia, told the Guardian that increased numbers of small earthquakes and more volcanic gas detected than usual in recent weeks had seen the alert level raised.

Even with the alert levels raised, volcanic eruptions are notoriously difficult to predict.

“Having visited it twice, I have always felt that it was too dangerous to allow the daily tour groups,” he said.

‘WE GOT OFF JUST IN TIME’

New Zealand Cruise Association CEO Kevin O’Sullivan has said that between 30 and 38 passengers from Royal Caribbean cruise ship Ovation of the Seas were on the island at the time of the eruption.

In a post on Facebook, White Island Tours operator Calvin Kingi wrote that his company’s group got off the island just in time.

“White Island just erupted as we left, we have our work mates and a tour still on the island, I hope they okay,” he said.

Twelve people were killed on the island in 1914 when it was being mined for sulphur.

Part of a crater wall collapsed and a landslide destroyed the miners’ village and the mine itself.

MOST READ IN WORLD NEWS

UNHAPPIEST DAY OF HIS LIFE


World’s moodiest groom completely loses it in front of guests

The remains of buildings from another mining enterprise in the 1920s are now a tourist attraction.

The island became a private scenic reserve in 1953, and daily tours allow more than 10,000 people to visit the volcano every year.

This is so hard to believe. Our whole tour group were literally standing at the edge of the main crater not 30 minutes before. My thoughts with the families of those currently unaccounted for, the people recovering now, and especially the rescue workers… pic.twitter.com/mn704hobRk

The eruption seen from a helicopter[/caption]