A KIWI ‘witch doctor’ is being questioned by police after a baby was found crawling away from five dead bodies discovered at the bottom of cliff.

The family of five – who were known to the man – were found lying at the base of a mountain range on the island of Fiji, about 20 miles from where their car had been abandoned. 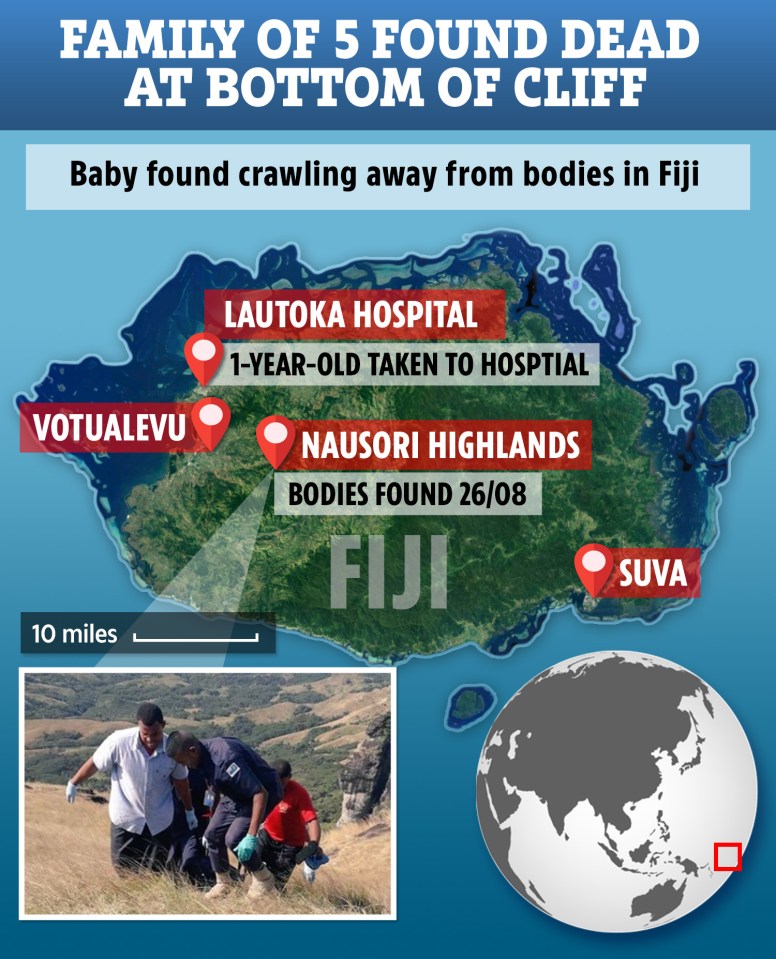 One-year-old Samaira Kumar was found crying by the roadside in the Nausori Highlands close to where her lifeless relatives were found.

Police confirmed the identity of the bodies as 63-year-old carpenter, Nirmal Kumar, his 54-year-old wife Usha Devi, their 34-year-old daughter, Nileshni Kajal and her two daughters Sana, 11, and Samara, 8.

It is not clear what relation the baby girl has to the family.

Kelera Toloi, 25, stumbled across the scene around 9am on Monday.

The young mother told the Fiji Sun: “I grabbed her and changed her soggy diaper straight away then fed her two milk bottles.

“Fortunately she couldn’t walk yet or she would’ve fallen off the cliff.”

Ms Toloi said she the infant had probably been alone in the wilderness, hungry and without shelter or sustenance for perhaps 36 hours.

I grabbed her and changed her soggy diaper straight away then fed her two milk bottles … Fortunately she couldn’t walk yet or she would’ve fallen off the cliff.

Post mortem results revealed the victims had ingested an alleged harmful substance which resulted in their deaths.

A 62-year-old bus driver from Christchurch in New Zealand, named by local media as Muhammad Raheesh Isoof, was taken by police for questioning.

Mr Isoof was reportedly born in Fiji but relocated to New Zealand and had know the family for decades, The New Zealand Herald reported.

Nirmal Kumar’s brother Raj told stuf.co.nz that Mr Isoof was known locally as “Kamal” and was a highly-sought after “healer” revered for his “special abilities”.

He said the man lived next door to the family and had been treating his sister-in-law Usha Devi for severe abdominal pains for several years.

A family friend, who did not want to be named, told the publication: “He prays for them and gives them some herbal medicine or something to drink.

“They’ve performed rituals together at the beach and elsewhere. This is not the first time they’ve been out together.

“Headaches, sores on the leg, any type of pain — he had this special power to fix it by praying for people.

“And he knew about herbal medicine sometimes he would give that too.”

He prays for them and gives them some herbal medicine or something to drink. They’ve performed rituals together at the beach and elsewhere.

Police made a court application to hold Mr Isoof for longer than 48 hours to continue their line of questioning in relation to the deaths.

However, the application was dismissed.

Police spokesperson Ana Naisoro told The Fiji Times that a man that was a person of interest had been interviewed and released.

Authorities are currently obtaining a “stop departure order” to prevent Mr Isoof and his wife from returning to New Zealand.

A police spokesman told the Fiji Sun: “We released the man, who we have been told is a witch doctor, (on Wednesday) and we released the woman when her 48 hours expired (on Thursday).

“They are our prime suspects right now. We also ran a check on the couple and they are both known in our police records, so we are just wondering how they got PR (permanent residency) for New Zealand.”

Nirmal Kumar’s brother Raj said: “It’s not one, it’s five. Five of them and I can’t handle much.

“We are trying to do as best as we can and it’s not an easy time.

“We’re having a hard time and I can’t say much.”

Neighbours said the family had gone out on Saturday afternoon and did not return home.

MOST READ IN NEWS


Girl, 19, 'dies after brutal gang rape by 4 friends at her birthday party’

FLOORED WITH ONE PUNCH

Their car was found at the New World supermarket car park in Votualevu.

Sumaira’s mother, who is thought to live in Australia, flew to Fiji on Friday morning, stuf.co.nz reported.

More tests are to be conducted by the Fiji Police Chemistry Scientific Lab in Nasova.

Earlier this month, cops found the body of missing Brit Nora Quoirin, ten days after the 15-year-old mysteriously disappeared from a holiday resort in Malaysia.

A rescue mission team of 300 worked around the clock to locate the vulnerable teenager.

The teen’s unclothed body was found on Tuesday, August 13, about 1.6 miles away from the resort where she had stayed.