A MUM and son are feared dead after their prefab home was swept away in freak flash floods following extreme weather across Spain yesterday.

A tornado ripped through the party island of Ibiza and freak flash floods after huge thunderstorms caused chaos throughout mainland Spain, with cops confirming one person dead so far.

A car destroyed by the floods in Arenys de Mar[/caption] 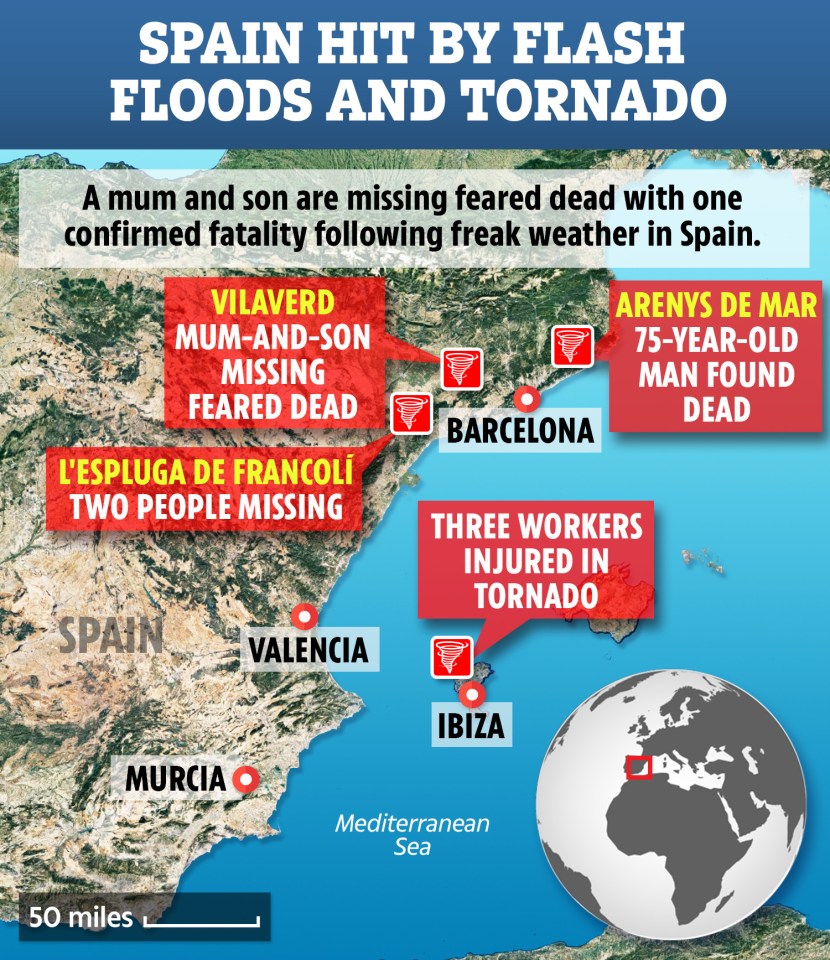 Officers say the body of a 75-year-old man swept away by a swollen river in the coastal town of Arenys de Marnorth near Barcelona has been found.

He had been attempting to move his car when the water engulfed him and he tragically drowned.

Search is ongoing for two missing people in the village of Vilaverd near Tarragona – a mum and her grown-up son.

A helicopter was due to be mobilised this morning to help in the search for the missing mum and son, believed to be aged around 70 and 40.

Regional Civil Protection chief Sergio Delgado confirmed: “Authorities are searching for two people believed to have been swept away in floods who were in a prefabricated bungalow as well as a person who has disappeared in the Arenys de Mar area.”

Trees were blown over, wrecking buildings[/caption]

A car has been damaged by a falling tree[/caption]

A car is dragged from floodwater [/caption]

The overturned car they were travelling in has been found in the River Francoli.

Firefighters are checking the badly-damaged vehicle to rule out anyone being still inside.

This morning parts of the north-east province of Girona were on red alert, with local authorities warning the river Ter could overflow its banks and advising locals to exercise “extreme caution.”

And yesterday, three men working on a building site in Sant Antoni, Ibiza were injured when the winds lifted their mobile cabin from the ground, Euro Weekly News reports.

The construction workers are believed to have been sheltering from the conditions at the time.

They were all taken to Policlínica Nuestra Señora del Rosario hospital with minor injuries.

Several roads on the island have also been closed to traffic after the tornado sent trees crashing down onto the streets.

A main road from Sant Antoni to Santa Agnès has been closed following 200 trees tumbling onto the tarmac in a stretch of just four and a half miles.

A man shovels debris out of his house, washed in by floodwaters[/caption]

The area was also hit by storms and lightning[/caption]

Spanish cops are working alongside Sant Antoni’s city council to re-open the roads as quickly as possible.

Seaside homes and villas have experienced shattered windows and a sport centre’s roof has been partially ripped off.

British tourists staying on the island have shared dramatic pictures showing how massive trees were blown down iÁnto hotel pools.

Sophie Kelly, a holidaymaker from Newquay told Sun Online: “Lots of power cuts went on into the night and lots of trees have been torn down and in half.

“The path down to Cala Gracio Beach has been cut off.”

“There was surprisingly little thunder but I’ve never experienced a lightning show like it.”

Spanish AEMET issued an orange weather warning which has now been decreased to yellow with 69 recorded weather incidents across the Baleariac islands.

MOST READ IN NEWS

Ibiza was the worst hit island but Mallorca and Menorca also experienced some unsettling weather.

Officials have issued flood warnings for areas near rivers, streams and the coast.

And at least four flights so far have had to be diverted from Ibiza airport.

Tables, chairs and pool loungers were strewn across one hotel’s patio after the powerful tornado[/caption]