A BIKINI-clad beachgoer punched, kicked and spat at a park ranger who asked her to stop climbing on a protected World War II relic.

The angry woman was filmed by shocked visitors at a former naval site built to repel raiding warships in Queensland, Australia.

The footage shows a pick-up truck parked on the white sand, close to the water.

The driver, wearing dark shorts with white stripes, gets out of the vehicle, before returning to it.

Moments later, she lunges at one, hitting his face and – while he’s trying to fend her off – lands a left hook to his face.

The ranger pushes her to the sand, but she springs straight up and throws a handful of sand in his eyes as other people rush to his aid.

She can be seen remonstrating with another beachgoer who is trying to stop the attack. 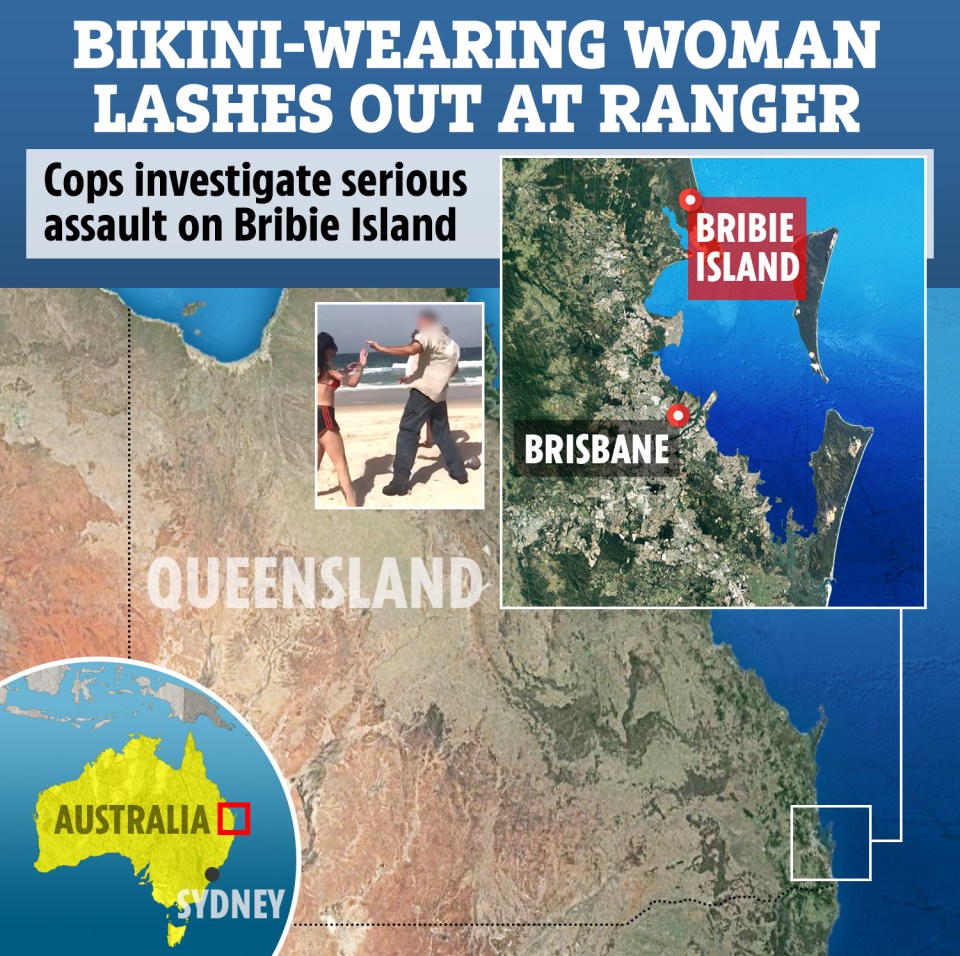 A spokesperson for Queensland Police said that at about 2pm on Saturday, “two rangers were working when they noticed people climbing on a WWII structure.

“When the male rangers, aged 41 and 44, approached a woman who was filming another [person] climbing on the structure, she started to assault both men physically by kicking, punching, scratching and spitting at  them.

“The woman then left the beach in a vehicle.”

After Queensland Police posted the clip of the assault on Facebook, it quickly racked up thousands of views and shares.

Ben Williams quipped on the page: “No-one told me that they were filming The Bachelorette on Bribie this morning!”

Others commented on the assaulted ranger’s “remarkable self-control”.

Most read in World News


Will.i.am met by cops at airport as he accuses flight attendant of 'racism'


Outrage as Syrian refugee with FOUR WIVES and 23 KIDS 'claims £320,000 in benefits every year'


Paedo to be CASTRATED for raping & killing girl, 9, snatched from class

The naval site of Fort Bribie was built at the start of the Second World War, and became operational in early 1942 to provide defence support against light raiding warships, according to Visit Moreton Bay Region.

Bribie Island was important to the defence of Brisbane as the main north-west shipping channel runs close to the shore there.

Fort Bribie was strategically located near the island’s northern tip to secure the shipping passage south.

While the fort was abandoned in 1945, visitors can still see the observation post, plotting room, gun placements and signals operation room.